RLSS Poole Lifeguard were at it again today with another great publicity stand right on our home turf – Sandbanks Beach, what more could you ask for! Well- sunshine for one thing and no rain for another. But I guess we can’t always have what we want. 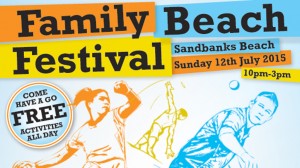 It was cloudy all day and rained practically all of it, which basically put a stop to our planned “HAVE A GO” sessions where we were going to encourage members of the public to try out our Safety Kayaks, Rescue Boards and for the braver ones the Guppies (Surf Skis). They were all lined up on the beach but nobody from the public wanted to get wet in the rain.

Still, inside the Marquee, that was left over from the 8th Annual British Beach Polo Championship, our PR stand attracted a lot of attention and a number of people had a go on our Resus Manikins and had fun trying out the choking dummy. 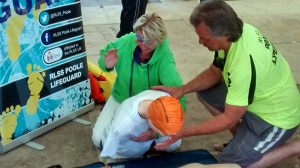 The whole event was hosted and organised by Poole Borough Council along with the Poole Beaches Staff. The Mayor of Poole along with the Sheriff were there to close the event and thank everyone for attending. They came over to our stand at the end and had a lengthy chat and thanked the club for all that we do. We mentioned the Brownsea Island Swim to which the Sheriff was sure that the Mayor would definitely be up for the challenge, however although she showed some interest the Mayor politely decline our invitation. 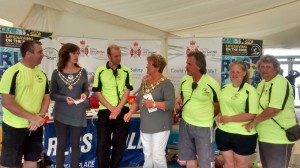 Whilst all this was happening, a fellow Lifeguard Club “South Worcester and Redditch Life Saving Club” were down for the whole weekend with about 25 members, taking part in their open water assessment at Sandbanks. As our Rescue RIB “Poole Legacy” was on hand for the Beach Sport Festival but was not require due to the weather, she was able to give a few of their members a little trip out in her, which from all accounts (seeing the smiles on their faces) thoroughly made their weekend.

So all in all despite the weather – a great day out for the club.

Thanks as always go to
James Marsh, Simon Moore, Mark Shakles, Brian Pemberton, Lara Moore and Julie Larner for manning the PR stand and to Louise Harrison and David Riley onboard Legacy 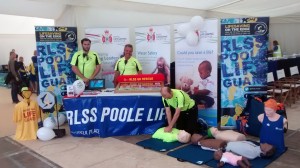 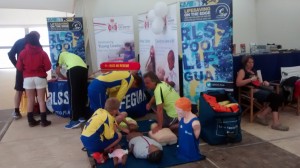 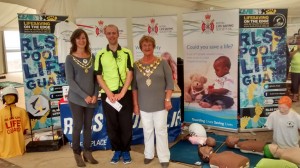