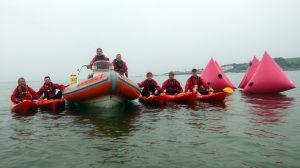 The Swanage Triathlon (organised by Results Triathlon – Michelle Noble) turned out to be our first Safety Cover event of the year due to our first event being postponed from May to June 18th due to horrible storms that came in over night on May 21st.

So off we set to Swanage today with the hire van stuffed full of Kayaks, Cag Tops, PFDs, Radios and of course the Course Marker Buoys, as well as Poole Legacy who came round by water, all converging  on Swanage Seafront at 06:00hrs prompt. 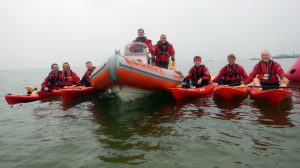 With the 750m course set and the Safety Briefing to the swimmers completed, we were informed that 72 swimmers had register and were entering the water. This was past onto the coastguard by radio on Poole Legacy and at 07:05 the mass of swimmers sprinted through the shallow waters that were thick with seaweed and smelling pretty revolting.

Once they were about 10m away from shoreline the seaweed cleared, the water was flat calm and with terrific visibly, which was not the same as the general visibility above sea water. The weather forecast had indicated it was going to be a scorcher but we were completely covered by a light sea mist which, thankfully, stayed light throughout the race, though you could see that just outside Swanage bay it was pretty thick. 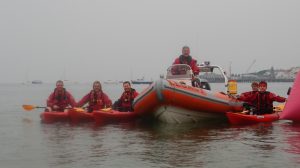 With all bar two tailend swimmers exiting the water, the marshals were asked how many swimmers had exited (basics of count them in and count them out) and were told 71 had finished, which was interesting as we still had 2 in the water, so we obviously gained one along the way some how. Still we all agreed that  it is better to gain one rather than lose one.

With the Swim Race finished and all our kit packed up, we gathered on the Triathlon Muster Area outside the refreshments van, to be treated to bacon and egg baps and a mug of coffee /tea all courtesy of the Results Triathlon organising team. Thank You !

So well done to all 73 people who finished the swim, we hope you enjoyed the 20km Bike and the 5km Run as much as you all appeared to enjoy the swim.

Also a big thanks to:

And finally to cap it off Daniel Hart went back to Sandbanks in Legacy and was able helm her virtually the whole way round so well done Daniel! 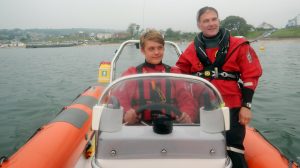 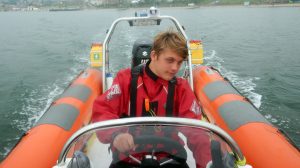