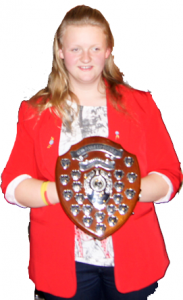 At our Club Annual Awards evening held during Februay 2014 a member  of the club was recognised with the above special award, please read on to find out who and why!

The RLSS Poole Lifeguard club provides safety cover on a weekly basis to the East Dorset Open Water Swimming Club during their swim training sessions.  On the evening of 16 July 2013 Lara Moore was providing safety cover with Amy Perch.  To provide the best cover Lara and Amy were patrolling, using sit on kayaks.  They separated so they could observe all the swimmers during their open water swimming training.

As Lara approached the Canford Cliffs area she heard someone calling for help.  She visually scanned the area and observed three people in the water, adjacent to the eight knot marker buoy.  Lara quickly assessed the swimmers she was covering and noted that Amy was also covering the group at this time.

Lara then approached the three people in difficulty by the eight knot buoy.  It was a father with his two five year old twin son’s.  Neither of the boys could swim, they had used kick boards to go out with their father.  One of the boys was being sick, due to swallowing a substantial quantity of sea water.  Lara identified this boy as being at most risk.  She gave advice to the father and informed him that she would return after taking the boy who was being sick back to the safety of the shore.  Having taken the first boy to the safety of the shore and his waiting mother, Lara paddled back to the second boy and his father.  Lara took the second boy into a tow and his father swam next to them until they reached the safety of the shore.

Lara spoke to the parents and provided them with advice regarding swimming in the sea and after care for their son’s.

Lara displayed excellent assessment and decision making skills, remaining calm and making use of her training and experience.  She assisted this family, who were in danger and returned them to safety.  By her swift actions she prevented a serious incident from developing into a major incident requiring the support of other emergency services.  Lara carried actions on the 16th of July 2013 over and above that deemed to be part of the normal activities being conducted by RLSS Poole Lifeguard Club that evening to rescue others who were in danger.